“Will be the best use of 1 hour this year…
and it’s completely free!”

If you’ve ever wondered why your attention span may have become pathetic at best, and it is likely getting worse over time and what you can do about it, then you are in the right place.

All learning follows these four steps.

So that’s the loop. And why learning is so important? Let me just quote Alvin Toffler:

That’s why attention is so important.

I’m going to give you a smattering of tools that can help with each area.

So tools that I use and the thousands of other people swear by for helping with internal attention. Number one is meditation and meditation can be either generic, whether it’s a transcendental meditation or something specific like focusing on a mantra and repeating that over and over,
OR writing out your mission statement, a mission statement for what you’re doing, what you believe in, what you stand for, and focusing on reiterating that. It doesn’t just need to be spoken. You can view a sport, an exercise regime that you have, as a meditation for you.

Whether that’s yoga, stretching, going for a run, doing sprints, doing weights, swimming. Whatever kind of exercise that you do, that puts you into a different mental state as a form of meditation. And it helps to pay attention to that.

What I want to talk about in more detail is tools that you can use to help your external environment to support your attention. Because if you’re like me, like many other people, you work online, behind a desk at a computer, they’re are a number of distractions, at every single turn.
And we really want to look at how can you minimize those distractions. I’m going to point you to a couple of tools that can really help. So the one thing that I want to start with is a concept called “The ONE Thing”. It is exactly what it says on the tin.

It really helps if you can just focus on one single thing and that’s it in a nutshell. A book that has been written by a very successful entrepreneur. A guy called Gary Keller who’s co-founder and chairman of Keller Williams Realty, which is one of the largest real estate companies in the world. He now consults and focuses on teaching his concept of the one thing.
What he found was the effectiveness of his teams went through a process where initially, each of his teams would have multiple things to focus on week by week.

Then he saw that not that much was getting done or his teams weren’t as effective as he wanted them to be. So he experimented with reducing the number of things that he wanted them to focus on and stripped it down and thought, “well, what if I just give people three things to focus on?”

And then “what if I just give people two things to focus on?” until eventually he experimented with,

“what if I just give each team or each head of division one thing to focus on?”

…and then just to operate around that one thing. The performance and productivity of all of the individuals that reported to him as well as his company went through the roof. His consulting practice is now focused on that. As another point of interest on that → Peter Thiel, who is a cofounder of PayPal and the Thiel Foundation, a very successful tech entrepreneur. He notoriously, rigorously, when he has managed people, he manages around one specific metric or one specific thing. The only conversations that he allows each individual report to have with him, the conversation has to be about that one thing. And if it’s not, then it’s not relevant at that time.

And it’s a discipline. It’s a management practice and a discipline both for you managing yourself… your own focus and effectiveness. And if you manage other people, to do the same. So I’m going to share

That was the name of the book.

There’s another, another couple of tools that I really like to use and I’d suggest you check out if you’re not already familiar with. One is using a process called Kanban. It’s a Japanese management process and it is so simple. I always find that the simplest tools are the best. In summary, you have three columns, possibly four.

And you can use a tool like Trello because it’s free or you could use a spreadsheet if you want, but Trello’s very easy to use. On the left you have a list of things. It’s your to do list and then the next list over at you have things that are in progress. Then what I like to do is to have an additional column. So rather than just having to do in progress and done, I like to have an additional column.

And you focus on that, and only that, until it is done. And then you moved out over. Now I know there are, there are nuances to this. Another piece of literature I recommend is called

“The productivity Ninja” by a guy called Graham Allcott.

I’ll link to that as well. And that is yes, it’s great to have one thing to focus on, but obviously throughout the day, your attention, your energy, can wane wax and wane. So it’s useful to have a set of items, a set of tasks that you can do that do not require your deep focus and concentration that you can just pick off. Let’s say you’ve had a kind of called heavy lunch or you feel particularly tired at some point in the afternoon. You want a list of things that you can just kind of knock off quite easily.

But for the one thing, you want that to be a meaty piece of work that requires a deep focus and concentration. So that’s Kanban, and Trello (which I’m sure you’re familiar with) and Productivity Ninja.

Those are a few tools for you to look at. This is a short episode. There’s way more that I could go into here and I’m going to be talking further in further episodes about things like the one metric that matters, accountability and how to structure Accountabilities to help with your productivity. But some of those will be in future episodes.

There is loads more on this topic that is really powerful stuff to get into that I want to cover in another episode… such as looking at design of your systems to help you focus and attend to what it is that you need to.

But before I go, I just want to finish with this quote, which is from a lady who lived in the early 19 hundreds. A lady called Muriel Lester who was a peace campaigner and activist and became good friends with Gandhi. Here’s the quote:

“The price of freedom is eternal vigilance.”

The price of freedom is eternal vigilance… that applies to the freedom that you have in your mind. You need to be vigilant to things that will take up your attention and take up your time. I think that’s a great quote to finish with. And finally, if you’d like some more detail on all of this, go over and put together a free training on metacognition, learning and learning how to learn and improving decision making. Going to storythis.com

And there is an excellent free training session for you there. Must’ve lost the, with more of this juicy goodness and some actionable takeaways.

I’ve really enjoyed having you tune in here. I hope you’ve found this useful. Stay tuned, subscribe below if you haven’t already, and I will catch you on another episode.

FREE: 3 chapters of my book: Take the first steps to super-charge your memory with:

Register now for our most popular free training: 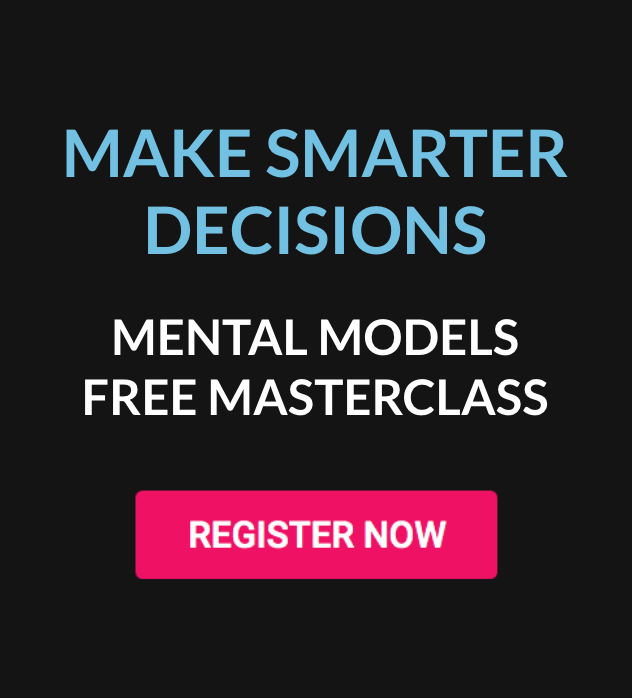 There is huge value in the first follower. Either BE that person OR if you are the #1, then make sure you nurture that person. Derek explains things clearly:

FOR the Use of Buzzwords

ME: Price marinading… Thoughts? Opinions? When to use / not use? p.s. (And here’s a picture of some marinading chicken). HIM: Sounds like yet another made up marketing buzzword. (I’ve

Shift to Network Thinking… And NOT as a User Acquisition Strategy

nfx are some of the smartest VCs out there (& accomplished in their own right >$10bn in exits of companies they built). Thinking in terms of network will become relevant

Delivered straight to your inbox